Prohibiting to beg for other player info etc. 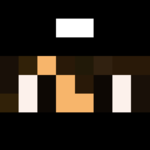